Latest Article: The evolution Triangle As a term, evolution is general, vague and is impregnated with numerous meanings, some of which are agreed upon conforming with empirical observations and some of which are contested. Conveniently, the term evolution is defined and expressed in a manner similar to that of horoscopes. Extremely broad, non-specific and all-explanatory, such that it is easy to interpret experimental data to confirm predictions. Download PDF

This is a forthcoming publication which tackles the subject of naturalist philosophy, atheism and evolution. Select chapters will be posted here [subject to updates so make sure to re-download]. 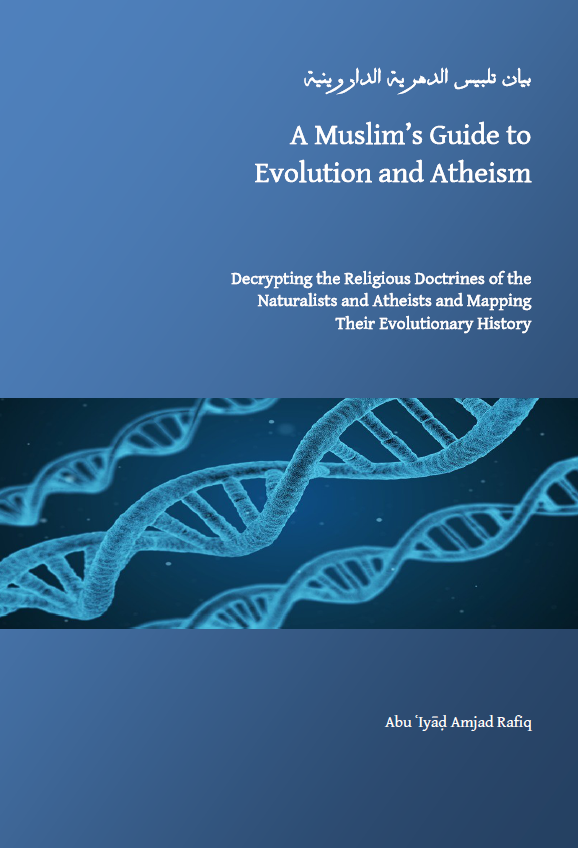 Important Preliminary Notes
The following are some important preliminary notes that should be kept in mind as you read this book: 1. Discussions are bound and restricted by definitions of terms. Misunderstandings are perpetuated in the absence of defining terms clearly and making clear how they are being used and applied in any given context.

Introduction
The claim that best fits the available evidence-according to the standards of scientific inquiry-is that biological life is designed and created through knowledge (ʿilm), will (irādah), power (qudrah) and wisdom (ḥikmah).

Key Tactics of the Naturalist Atheists
There are a number of high-level operational tactics employed by atheist evolutionists. We will mention three main ones here: First: The deliberate, calculated separation between: a) the origin of life, termed abiogenesis. This refers to the process of biological life arising from non-living matter...

Ibn al-Qayyim and a Naturalist's Self-Dialogue
In the preceding chapters we focused upon the saying of the evolutionists at the highest conceptual level. The naturalists and atheist evolutionists cryptically conceal their attribution of "choice with intent" or "will, power and wisdom" to nature-implicitly or explicitly-through the clever use of language (choice of words) and creative definitions of terms...

Biological Life and Linguistic Information All known functionality in biological life is prescribed and controlled through information. Language(s) and grammar(s) are behind biological life. Hubert Yockey, the first person to apply information theory to biological systems and also a naturalist, wrote (emphasis added): "Information, transcription, translation, code, redundancy, synonymous, messenger, editing, and proofreading are all appropriate terms in biology. They take their meaning from information theory and are not synonyms, metaphors, or analogies."

DNA, the Genome and Information DNA is a digital communication and control system. The discoveries, formulas and communication theories which created our modern digital world and the basic ideas and principles of computer design and engineering of Von Neumann, Alan Turing and Norbert Weiner (inventor of cybernetics) were derived from the linear digital genetic programming in life.

A Falsifiable Hypothesis to Prove Agency Evolutionists detest conceptually, physically accurate, like for like analogies because they show convincingly?through common sense and basic reason?that the claims of evolutionists are not easily believed by laymen and learned alike, especially when the smoke has been cleared, the mirrors smashed and their thinking exposed as being no different to the primitives of old.

Evolution History and Current Status There have been three broad stages in the doctrine of evolution. The first was popularised by Charles darwin in the mid 19th century when knowledge of biology was primitive and the fields of biochemistry and genetics were unknown. It is referred to as Darwinism. Simply put, the observable similarities in animals indicate that all living species arose through descent with modification from a common ancestor with the fittest?those having superior hereditary traits leading to better reproduction and survival rates?passing on their fitness traits to subsequent generations.

Elaboration with a Communications Analogy The following is a good analogy for understand the nature of cellular and genetic communications. Zayd has a thought and goes to his laptop. He opens up Microsoft Word, creates a new document and writes a message. He inserts an image into the document. After saving the document, he opens his email program. He composes a message in which there are instructions, attaches his document and presses the send button.

The evolution Triangle As a term, evolution is general, vague and is impregnated with numerous meanings, some of which are agreed upon conforming with empirical observations and some of which are contested. Conveniently, the term evolution is defined and expressed in a manner similar to that of horoscopes. Extremely broad, non-specific and all-explanatory, such that it is easy to interpret experimental data to confirm predictions.

Discussion with an Atheist A short email discussion with a Muslim turned atheist regarding evolution and whether creation can be ascribed to God or to "evolution" and "nature".