The aim of this brief article is to just lay down a basic categorization to help better understand the different layers of atheists that are present. It is a useful categorization because one does have to separate out these atheists in way to make sure justice is done to each category and each type can be addressed appropriately. It is also important to note what it is that actually separates them into different layers. 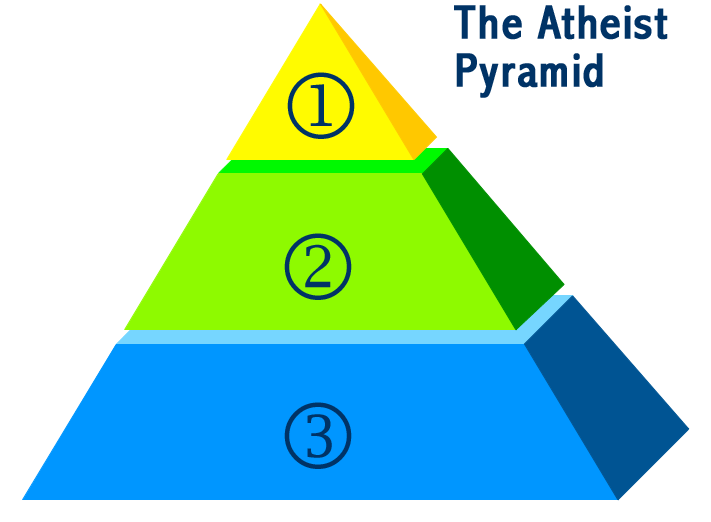 There are three levels in the Atheist pyramid. (1) At the top we have the truthful, non-deluded, non-pretentious atheists. They are honest about their position and admit that they have chosen naturalism as a preferred world view - before any science even comes into the picture. (2) Below them are the artificial, pretentious atheists. They are not honest enough to make the frank admission made by the ones at the top. The "New Atheists" are here in this level. They fraudulently assert a level of certainty and conviction for their naturalist, materialist dogma based upon conjectures that the scientific method has not and cannot validate (3) Right at the bottom are the common atheists, the riff-raff. They are convinced by those above them that naturalism (materialism) is the only truth. Some of them inherit the arrogant pretentiousness of the second level. These people lack the intelligence and shrewdness of those above them, and they are mostly blind-followers (muqallidah) of the second level.

The Top of the Pyramid

Let us see examples of those at the top of the pyramid. Richard Lewontin (evolutionist) is very frank and honest:

Our willingness to accept scientific claims that are against common sense is the key to an understanding of the real struggle between science and the supernatural. We take the side of science in spite of patent absurdity of some of its constructs, in spite of its failure to fulfill many of its extravagant promises of health and life, in spite of the tolerance of the scientific community for unsubstantiated just-so-stories, because we have a prior commitment, a commitment to materialism. It is not that the methods and institutions of science somehow compel us to accept a material explanation of the phenomenal world, but, on the contrary, that we are forced by our a priori adherence to material causes to create an apparatus of investigation and a set of concepts that produce material explanations, no matter how counter-intuitive, no matter how mystifying to the uninitiated. Morever, that materialism is absolute, for we cannot allow a Divine Foot in the door. Billions and Billions of Demons, New York Review of Books, 01/09/97.

Thomas Nagel (atheist, naturalist), speaking about something much deeper than fear of religion:

I am talking about something much deeper - namely, the fear of religion itself. I speak from experience, being strongly subject to this fear myself: I want atheism to be true and am made uneasy by the fact that some of the most intelligent and well-informed people I know are religious believers. It isn't just that I don't believe in God and, naturally, hope that I'm right in my belief. It's that I hope there is no God! I don't want there to be a God; I don't want the universe to be like that. My guess is that this cosmic authority problem is not a rare condition and that it is responsible for much of the scientism and reductionism of our time. One of the tendencies it supports is the ludicrous overuse of evolutionary biology to explain everything about life, including everything about the human mind. Darwin enabled modern secular culture to have a great collective sigh of relief, by apparently providing a way to eliminate purpose, meaning, and design as fundamental features of the world... The Last Word (1997) p. 130-131

Nagel was speaking of apparent things that atheists find reprehensible about religion, causing them to fear it. He shows that there is a much deeper feeling and emotion that goes beyond that fear and this is the hope and want that there should be no God. He explains this is really what is behind the dominant philosophy of scientism and reductionism (materialism, naturalism) present today. Also that this emotional feeling tends to support the "ludicrous overuse" of evolutionary biology to the extent that it eliminates purpose, meaning and design from life and the universe. As naturalism must explain by purely random undirected causes, design can only ever be perceived as "illusory." Hence, the spate of books by Atheists from the second level of the pyramid bending over backwards in attempting to make design illusory - a sign of pure arrogance and revilement of intellect on top of that.

evolution is promoted by its practitioners as more than mere science. Evolution is promulgated as an ideology, a secular religion, a full-fledged alternative to Christianity, with meaning and morality. I am an ardent evolutionist and an ex-Christian, but I must admit that in this one complaint - and Mr Gish is but one of many to make it - the literalists are absolutely right. Evolution is a religion. This was true of evolution in the beginning, and it is true of evolution still today. Evolution therefore came into being as a kind of secular ideology, an explicit substitute for Christianity. How evolution became a religion: creationists correct? National Post, pp. B1,B3,B7 May 13, 2000.

Note that Michael Ruse wrote this as the opening quote in his article while stating at the end that he expects this to be the only paragraph to be quoted from the article by people for their own ends instead of trying to understand what he is trying to say. So to make sure we don't misconstrue anything, we will cite this portion from the same article:

I think that if, as I myself would, you extend the scope of the theory [of evolution] to an understanding of knowledge acquisition and justification and the same for morality - evolutionary epistemology and evolutionary ethics - then it can act as a religion substitute or alternative. It gives you a world picture that some people, starting with me, find entirely satisfying... I do nevertheless think that often Dawkins and company show the sociological characteristics of the religious... so the New Atheists loathe people like me who (like them) have no religious belief but who think that science as such does not refute religion. Having conceded this, I do also think that there are and have been Darwinians who have made something of a religion - call it a secular religion, if you like - out of their science...

What he is saying that evolution can be a "religion" when its scope is extended to other areas (as is done by most if not plenty of atheists) and that Dawkins (and the New Atheists) show social characteristics of the religious. So really, the first paragraph of Mr. Ruse still stands as it relates to evolution as a religion - you can read the full article here and it should be read along with the types of statements one finds from Lewontin and Nagel cited above.

The Second Level of the Pyramid

The second level is occupied by the not so honest atheists, and these are people like Richard Dawkins, Lawrence Krauss, Peter Atkins and others. Some of them tell blatant lies such as Dawkins who claims that we now know and understand how life began - and this is an example of self-delusion. The superior first level of the pyramid does not really fall into this. False certainty is portrayed by this level of the pyramid through their writings, lectures and publications. There is much sophistry coming from their direction as they try to peddle their naturalist religion onto the masses. As an example, Peter Atkins (Mr. Zero) claims that universes can come from nothing because the universe's positive and negative charges are equivalent, cancelling out to zero. Hence, the universe can - from nothingness - split into existence into positive and negative charges! That's the sum of his intellect and his knowledge. And Lawrence Krauss (Mr. Nothing) follows a similar line. There is a Mr. Zilch and Mr. Sifr out there somewhere as well. Despite the sophistication with which their conjectures are presented, their saying ultimately reduces down to matter self-creating and self-organizing. And thus, if such idiots, to borrow Ibn Taymiyyah's words, can accept that the sum whole of the universe can come to be without a creator and without prior matter, then it is even more acceptable for it to come to be with a creator, whether with or without prior matter (see article). So in reality, naturalism is just a preferred philosophy, not because the scientific method proves it, but because it appeals emotionally to atheists. They want it to be true. But they can't prove it. Then the framework for scientific enquiry is constructed on top of that. So these people (of the second level) are arrogant, often wanting in intellect (as can be seen with Peter Atkins from the example above). They are dishonest and incoherent but have much sophistry at their disposal. They make claims and conclusion that go beyond what is allowed for them within the confines of the science they claim supports them, and they have plenty of hidden and undisclosed assumptions that lie behind what they claim to be certainties in science, and which allegedly support their naturalist religion. They and their sophistries sway over the run-of-the-mill, atheist rabble at the third level. It must be pointed out here that many of these Atheists do have legitimate arguments and observations about corrupt religion, or corrupt doctrines found in corrupt religion, and this is part of the reason why they and the level beneath them are convinced of the correctness of their stance.

The Third Level of the Pyramid

The third level are dominated and governed intellectually by second level above them and are mostly oblivious to the smart and honest atheists at the top who make frank admissions about the naturalist, materialist religion that is assumed preferentially (not scientifically). These people are deceived by the false certainty that is preached by the unscrupulous and dishonest second level who trangress the scientific method itself in many of the grandiose claims (conjectures) they make and which they clothe in the garb of certainty. The apparent sophistication in what they profess easily deceives this third level who cannot see the intellectual bankruptcy and dishonesty that lies beneath the naturalist, materialist religion. This will be elaborated upon in greater detail in other articles.