This is a follow up to our previous article titled, "Qur'anic Evidences For the Motion of the Sun Being Responsible for the Phenomena of Night and Day", (here), in which we explained how 19th century science was unable to validate the claim of the astrologer-astronomers such as Nicolaus Copernicus (1543) and sun-worshipping magicians such as Giordano Bruno (1548-1600) that the sun is stationary in relation to the earth and that the earth is in motion around it.

In this article, we present a paper by a non-Muslim author which provides a more detailed treatment of the subject. The 19th century experiments alluded to earlier caused a huge crisis in science and over two decades this led to the invention of "special relativity"--a mind trick used to reverse reality, validated only by maths on paper--and intended as a clever means of explaining away these experiments. This was achieved by providing clever mathematical "transformations" in which the constants of time, distance and mass were made variables and light was made absolute in order to provide a mechanism through which a stationary earth--indicated by these experiments--could be "transformed" into a moving earth. This was to save the Copernican doctrine from invalidation and avoid embarassment with respect to 400 years of incorrect cosmology. Modern cosmology developed on the back of this, and led to the currently accepted conjectural Big Bang models of the origin of the universe inclusive of the "solar system". These are essential elements of the materialist, naturalist, dogmatic religion of self-creating universes leading to self-creating, self-organising goal-oriented organisms of life. This model is false with no empirical basis and relies on assumptions, conjectures, the use of analogies (to replace empirical testing of cause effect mechanisms) and the continued invention of ad hoc forces and particles to keep it alive, the while it is on a life-support machine in intensive care. Download PDF.

Note: Giordano Bruno (1600 CE) was a solar magician who promoted Copernican's heliocentric model across European circles. He believed that space is infinite, all stars are suns like our own, that these suns are huge in size but only appear small because they are very remote and that they also have planets orbiting them and inhabited by alien life forms. This is the foundation of modern cosmology religion, which naturalists and atheists push today through scientific and technological trickery. There is only one sun. Stars are not suns. As for the sun it is primarily and essentially electrical in nature and not a ball of gas as is alleged. The clearest of evidences is that plants can be made to grow through electrical lamps but not by blazing fires. The notion that the universe is also electrical in nature is closer to the truth, there being a universal medium within which the phenomena of electricity, magnetism and light are able to exist and take place. The sun, an electrical lamp, excites the noble gases in the atmosphere, and this is how we get the various colours in the sky during daytime, dawn, sunrise, sunset and their approaches. When we see the sun as an electric lamp, then there is no doubt that it was intended, and this points to creation. Most of modern cosmology is just a means of covering these realities. The proponents of the electric sun and electric universe are closer to the truth. As for the Big-Bangists, they should be seen as circus clowns because the observations and empirical data is so far off from their theories that they have to keep inventing ad hoc particles and forces to save and perpetuate the model. 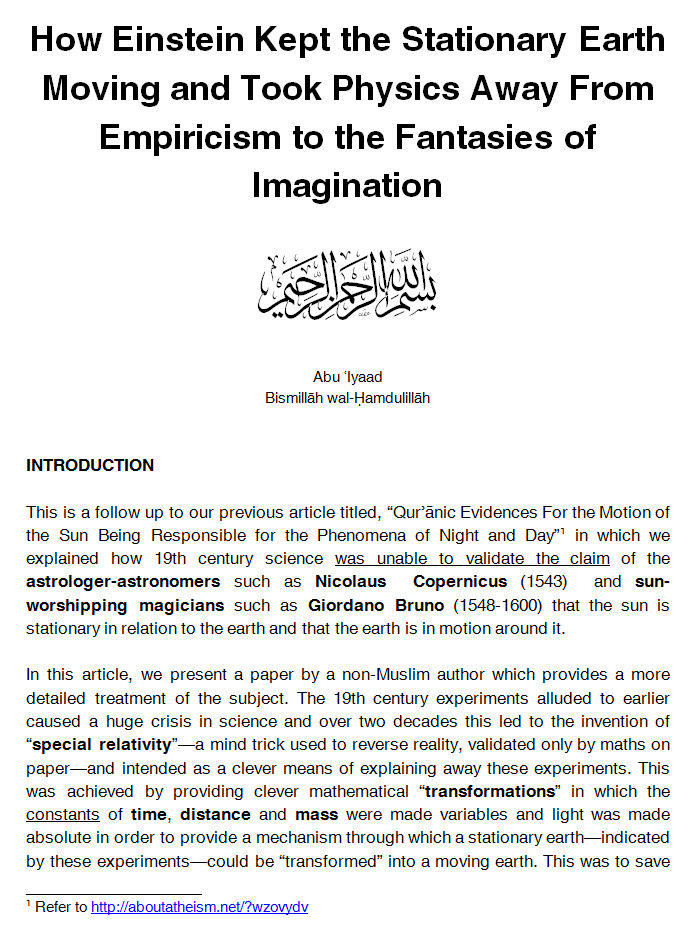