Note: The objections of David Hume against arguments from design (Paley's watch) have been undermined and invalidated by advancements in biotechnology and other technological and industrial fields whereby systems and organs in living things are studied, analyzed, reproduced and mimicked in order to provide solutions to problems. The gap between technology and biological systems is closing as time progresses which proves that objections such as "living organisms are unlike objects manufactured by humans" are fallacious. On the contrary, the evident design inherent in all living organisms is being drawn upon to gain ideas and understandings to aid in the design of more sophisticated, smart and efficient machines or technologies.

Might be a good idea to read this article first (Ibn Taymiyyah on the Reasoning of the Atheist). Statements of some atheists in relation to design: Richard Dawkins writes, "Living things are not designed, but Darwinian Natural Selection licenses a version of the design stance for them. We get a short cut to understanding the heart if we assume that it is designed to pump blood" (The God Delusion, p. 212). Living things are categorically 'not designed' but you get 'short-cuts' to (scientific) understanding by assuming things are 'designed.' Such sophistry, double-speak and arrogance in one sentence. All scientific, technological and industrial activity has to assume actual design, order and regularity in life and the universe. Jerry Coyne writes "If anything is true about nature, it is that plants and animals seem intricately and almost perfectly designed for living their lives" (Why Evolution is True, p.1). Michael Shermer writes, "The design inference comes naturally. The reason people think that a Designer created the world is because it looks designed" (Why Darwin Matters, p.65). Note how these atheists cannot deny design, and it is only because of a prior metaphysical belief in naturalism, materialism that they portray it as being "illusory" and only "apparent."

The inference from design to designer is innate, logical, rational, and totally warranted. It is why you see these Atheists on the tips of their toes, making very carefully crafted statements like those you read above - design is there, but they have to make it go away. How is that done? Assert a metaphysical belief in naturalism and actual design (by any standard) can then be treated as an "illusion of design", why, because naturalism is true. However, despite this swindle, researchers have a hard time trying to understand why even Atheist professors cannot avoid teleological language (consciously or subconsciously), let alone those less-educated than them (read about it here). The story below is just one illustration of thousands of similar ones that could be given (in the field of technology and industry) to demonstrate why it is that no matter how much brainwashing and propaganda is employed to convince people that "nothing creates something" or "matter self-creates and self-organizes" there is within each soul a pre-programmed innate ability (fitrah) to recognize and accept certain universal truths and to be averse to purely material explanations of life. This innate default can be difficult to undermine, and it is the basis upon which the Prophets and Messengers made their call, to corroborate this universal truth and to complete and perfect what this innate disposition necessitates in belief, speech and action. 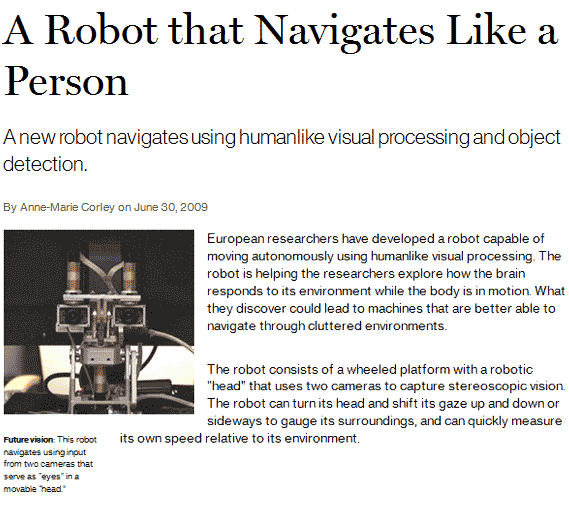 The machine is controlled by algorithms designed to mimic different parts of the human visual system. Rather than capturing and mapping its surroundings over and over in order to plan its route - the way most robots do - the European machine uses a simulated neural network to update its position relative to the environment, continually adjusting to each new input. This mimics human visual processing and movement planning.

Mark Greenlee, the chair for experimental psychology at Germany's University of Regensburg and the coordinator of the project, says that computer models of the human brain need to be validated by experiment. The robot mimics several different functions of the human brain - object recognition, motion estimation, and decision making - to navigate around a room, heading for specific targets while avoiding obstacles and walls.

Ten different European research groups, each with expertise in fields including neuroscience, computer science, and robotics, designed and built the robot through a project called Decisions in Motion. The group's challenge was to pull together traditionally disparate fields of neuroscience and integrate them into a "coherent model architecture," says Heiko Neumann, a professor at the Vision and Perception Lab at the University of Ulm, in Germany, who helped develop the algorithms that control the robot's motion.

Normally, Neumann says, neuroscientists focus on a particular aspect of vision and motion. For example, some study the "ventral stream" of the visual cortex, which is related to object recognition, while others study the "dorsal stream," related to motion estimation from the environment, or "optic flow." Still others study how the brain decides to move based on input from both the dorsal and ventral streams. But to develop a real, humanlike computer model for navigation, the researchers needed to incorporate all these aspects into one system.

To do this, Greenlee's team started by studying fMRI brain images captured while people were moving around obstacles. The researchers passed on the findings to Neumann's group, which developed algorithms designed to mimic the brain's ability to detect the body's motion, as well as that of objects moving through in the surrounding environment. The researchers also incorporated algorithms developed by participant Simon Thorpe of the French National Center for Scientific Research (CNRS). Thorpe's SpikeNet software uses the order of neuron firing in a neural network to simulate how the brain quickly recognizes objects, rather than a more traditional approach based on neuron firing rate.

Once the robot had been given the software, the researchers found that it did indeed move like a human. When moving slowly, it passed close to an obstacle, because it knew that it could recalculate its path without changing course too much. When moving more quickly toward the target, the robot gave obstacles a wider berth since it had less time to calculate a new trajectory.

Robots that navigate using more conventional methods may be more efficient and reliable, says Antonio Frisoli of the PERCRO Laboratory at Scuola Superiore Sant'Anna, in Pisa, Italy, who led the team that built the robot's head. For example, a robot guided by laser range-finding and conventional route-planning algorithms would take the most direct path from point A to point B. But the team's goal was not to compete with the fastest, most efficient robot. Rather, the researchers wanted to understand how humans navigate. We, too, says Frisoli, "adapt our trajectory according to our speed of walking."

Applications of the technology could include "smart" wheelchairs that can navigate easily indoors, says Greenlee. A few members of the consortium have applied for a grant to follow up on this application, while one of the original partners, Cambridge Research Systems, in the U.K., is developing a head-mounted device based on the technology that could aid the visually impaired by detecting obstacles and dangers and communicating them to the wearer.

Tomaso Poggio, who heads MIT's Center for Biological and Computational Learning and studies visual learning and scene recognition, says of the EU project, "It seems to be a trend, from neuroscience to computer science, to look at the brain for designing new systems." He adds that we are "on the cusp of a new stage where artificial intelligence is getting information from neuroscience," and says that there are "definitely areas of intelligence like vision, or speech understanding, or sensory-motor control, where our algorithms are vastly inferior to what the brain can do."

It is impossible not to use teleological language when describing life and when it is clearly the case that robots are not produced except through a combination of knowledge, will, intent and purpose alongside the study of the human brain (to get ideas and understanding), then it is from the height of arrogance to feel proud of these types of achievements (because of the ingenuity, skill and creativity involved) and then to claim that the thing studied from which all such ideas and understandings came from is the product of random, undirected processes.