The Muslim scholar Ibn al-Qayyim (d. 1350) said: "Whoever reflects upon the whole universe, its upper and lower [parts] and all of its domains will find it bearing witness to the affirmation of its maker, originator and owner." Madārij al-Sālikīn (1/82)

According to Wikipedia, Massimo Pigliucci is a "Professor of Philosophy at CUNY-City College, formerly co-host of the Rationally Speaking Podcast, and formerly the editor in chief for the online magazine Scientia Salon. He is an outspoken critic of pseudoscience and creationism, and an advocate for secularism, science education."

Pigliucci wrote a paper in 2010 with Maarten Boudry (another philosopher and skeptic) titled: "Why Machine-Information Metaphors are Bad for Science and Science Education", and it was published in the Science and Education Journal.

In summary, what they are saying is that the use of metaphors that involve machines, computers, codes, information transfer, factories and so on for biological organisms and life should be dropped because they allow "creationists", "intelligent-designers" and so on to make their "spurious case".

Some quotes the paper:

Scientific thinking and education are rife with the use of metaphors... In biology and biological education in particular, metaphors are pervasive at almost every level of description and explanation. Brown (2003, p. 159) has even argued that "biology today reveals more forcefully than any other area of science the essential role of metaphor in scientific reasoning and communication." Perhaps this pervasiveness of metaphors is an inevitable result of the way human beings think (Lakoff and Johnson 1980; De Cruz and De Smedt 2010), but it has consequences for both science education and scientific research, and not necessarily for the better.

In response to the above, the reason why these metaphors are pervasive is because, as we have explained elsewhere:

Innate human faculties unavoidably generate beliefs of design, order and purpose which are rationally legitimate and warranted. Marks of design and purpose are recognized perceptually and implicitly (innately) and from here the inferential step to a designer is natural, minimal, rational and warranted. Such marks include contrivance, order, organization, intent, purpose, law-like behaviour, pursuit of goals or outcomes or goal-steering mechanisms, regularity, beauty and adaptation. This itself is the very source of the rational justification for science and the scientific method, since the scientific method has underlying assumptions that cannot be verified by the scientific method itself, and must be assumed. It is therefore not possible to separate innate beliefs about the universe from scientific inquiry and the scientific enterprise as a whole. This is why up until the 19th century, and in the entire history of humanity--with very rare exceptions--all scientific research was conducted by believers in a Creator on the basis that they were studying the mechanisms in creation--the ways and means, the causes and effects, the handiwork of the Creator--in order to gain further enlightenment about the Creator. Likewise, to exploit their findings to facilitate human progress. The entire scientific enterprise rests upon the assumptions that the universe is real, material, orderly, designed, consistent and rationally investigable. This is why it is impossible to erase the innate disposition (fiṭrah)--in which belief in a Creator is permanently embedded--through any amount of materialist brainwashing within the lifecycle of education. It is why people will always be inclined towards belief in God and the desire to worship a Creator." (This is Islam, 1st edition, 2018, p.8).

Returning back to the paper, they continue:

The simple empirical observation that science talk depends heavily on analogical thinking mandates that we examine the consequences of deploying certain metaphors on how students and the public at large end up understanding science, and that we be attentive to the way pseudoscientists often seize upon these metaphors to foster misunderstandings.

In other words, the use of metaphor and analogy suggests that biological organisms and life are designed to be the way they are, and to operate upon this premise is "pseudoscience". Hence, we have to essentially protect the minds of vulnerable students--who clearly are not able to think for themselves--from being deceived by design theories instead of accepting the more rational and scientific physico-chemical randomness, blind-watchmaker theories!

And just look at how worried Pigluicci is here:

Specifically, if we want to keep Intelligent Design out of the classroom, not only do we have to exclude the 'theory' from the biology curriculum, but we also have to be weary of using scientific metaphors that bolster design-like misconceptions about living systems. We argue that the machine-information metaphor in biology not only misleads students and the public at large, but cannot but direct even the thinking of the scientists involved, and therefore the sort of questions they decide to pursue and how they approach them. For instance, there undoubtedly were very good reasons to pursue the Human Genome Project during the 1990s and the early part of the 21st century, but obtaining the "blueprint" for how human beings are made (and therefore cure genetic-based diseases like cancer) was certainly not one of those good reasons. Yet, it was the blueprint rhetoric?based on the actual informatics-directed thinking of the scientists involved?that helped sell the 4.2 billion effort (in 2009 dollars) to the American public, not to mention redirect the research time and intellectual efforts of tens of thousands of scientists and graduate students the world over.

The rest of the paper is simply a more detailed discussion of this "problem" and how to devise a new type of language or metaphor to protect students from being misled so easily to the design intuition by their basic (and very vulnerable) common sense.

Well, Pigluicci and Boudry better get a good supply of these adult diapers for the following reasons:

First: The design inference or analogy and machine metaphor is simply inescapable and that is why evolutionary biologists have to submit to it--it being necessary to study and understand nature and even to do science at all. Take a look at an example statement of Dawkins in The God Delusion (p. 212):

You get 'short-cuts' to (scientific) understanding by assuming things are 'designed.' And Michael Shermer writes in Why darwin Matters (p. 65):

And Jerry Coyne writes in Why evolution is True (p. 1)

So here you can see that this type of language, "machine metaphor", analogy and so on is inescapable. All of these are die-hard atheist evolutionist, and they are unable to escape this language. The reason is because fitrah (innate disposition, intuition) and khalq (creation, origination) are binding and inseparable, and one can only speak on the basis of language that actually describes reality. Thereafter, the unnatural, "pseudo-scientific" language is the one in which actual realities are erased, not the one in which they are affirmed.

Second: The differences and boundaries between human design (and what that entails of the exercise of knowledge, will, choice, wisdom and power) and design in nature (which then must also imply the exercising of the same attributes) are being erased due to emerging sciences and processes such as Biomimicry. As such, when these disciplines are being taught or studied, the "machine metaphor" is inescapable.

Third: Following on from the above, Biomimicry is being taught to children in order to promote the STEM subjects (science, technology, engineering and maths) -- see here for example. 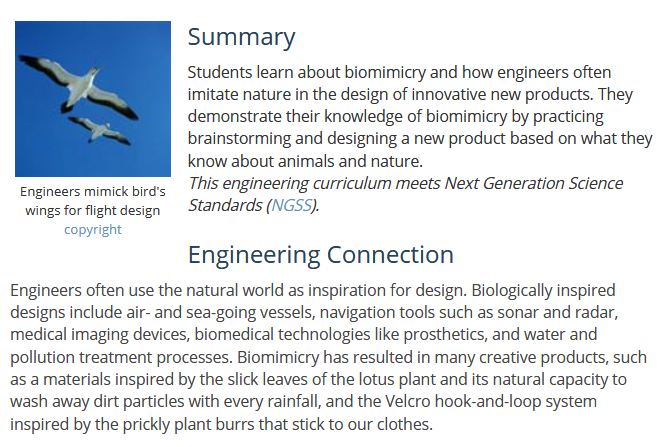 Fourth: As part of this, it is inevitable that "machine metaphor" and analogies continue to be given, and from them are the following (in the above curriculum):

As such, Pigluicci and Boudry's message and call only exposes the fear present with these atheists and reveals how brittle their materialist religion really is in that they have to play cryptic, technical word games in order to continue their illusion that design in nature is an illusion and is but the product of random physico-chemical dynamics.